The Ice Hockey , sports less known that football bookmakers, can be an excellent opportunity for sports paris. As the plays-off begin, let's take a look at the NHL.

The NHL (National Hockey League) is the ice hockey championship that dominates all others by its reputation, the quality of its players and the spectacle it provides.

Here are some tips in sports betting for those who want to test their skills as a tipster and try to win some money.

The main types of bets:

It is possible, as in football to bet, on the result of the match at the end of regulation time. The draw is therefore integrated. Odds, therefore, can be interesting, but be aware that 20 to 25% of meetings end in a draw.

The most common bet on the NHL. It consists of choosing the winner of the match, after extra time (5 minutes) and possible shots on goal. The interest is that by removing the draw, it only offers 2 possible results. The downside is that the odds are lower.

The objective is to determine if the number of goals scored by the 2 teams will exceed the figure proposed by the bookmakers .

If in European championships this figure can vary considerably, in NHL it is between 5 and 6.

If you bet that there will be less than 5.5 goals scored and the result is 3-2, you will win your bet. If the cut is 5, the bookmaker will reimburse you.

As in football, it is an interesting bet if you can spot the teams that score a lot or those who play defense.

Thus, during the 2011 season, playing systematically under 5 or 5.5 during the New Jersey Devils matches was almost equivalent to a rent.

Before risking your money on a game, there are a number of factors to consider. We will only mention those specific to the NHL, knowing that, as in all sports, we must take into account the injured, subsequent confrontations between the teams, the past and future calendar…

The importance of the guardian 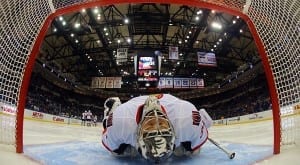 The goalkeeper has a crucial role in a hockey team. In the NHL, he faces an average of thirty shots per game. The quality of an encounter and a season often depends on its quality. The main statistic to watch to know if we have to do with a good goalkeeper, concerns precisely their percentage of stops in a season. A figure below 90% reveals an inconclusive and unreliable goal. The best ones are above 92% off. This difference may seem small, but it is often enough to determine a winner.

As in all US sports (except football), during the regular season matches are played every day. In hockey, from October to April, the pace is intense, and almost all teams experience periods of euphoria, where they will chain victories, which will alternate with periods where success will be much more rare.

The ranking is therefore not always a good indicator of who to bet on. Similarly, it is not uncommon to see teams chain more than 6 wins in a row as others do not manage to get out of a spiral of defeats. If you can spot a team that starts a series (not always easy), it is always tempting to "surf" on it.

This is why we must also pay close attention to the last games played. The “last 10” or “last 5” statistics allow you to view the current series but also the goals scored and conceded, the number of shots conceded…

The advantage of US sports is that there is no shortage of sites where you can find information on aligned teams or match reports. In addition, Americans are fond of statistics (sometimes to the point). They are found on everything. Home, away, goals scored, stat by player, inter or intra-conference confrontations ... Thus, we can even know that "Boston is 7-2 in his last Monday games" (the first figure being that of victories).

Of course they are all in English (American), and a minimum of command of the language of John Wayne is necessary (if not, it is also a good way to progress). The favorites and the outsiders are designated by the terms "dog" and "underdog"

The most complete is probably asianconnect, which covers different sports. There you will find all the essential statistics, but also forecasts of bettors.

For the goalkeepers lined up, we can consult dailyfaceoff.com

Otherwise by going to NHL.com you can access the various rankings to the latest news, and also to the websites of the teams in the league.

But the interest of the NHL, is that one can find a good number of Quebecois sites, and therefore French-speaking, which cover their national sport.

It would be a shame to do without all these analytical instruments. It does not prevent losing a bet, but used well it limits the risks. That's hockey!

Now that you have understood better how it works and how to bet on Hockey, you have only one thing to do :

Back to HOW TO BET ON SPORTS